Van Thawng Thawng’s phone buzzed as a series of notifications flashed on the screen.

“Has anyone spoken to Ezekiel?” asked someone on the Facebook group of the Chin Student Union, an organization that represents students from Myanmar’s northwestern state of Chin. But no one had heard of the 20-year-old union leader.

A week later, on April 14, a friend called Van Thawng Thawng to tell him that Ezekiel’s body had been found.

They believed he was beaten to death by security forces. Van Thawng Thawng was devastated.

“I just feel very stressed and angry, especially with the military. Because Ezekiel isn’t the only one, ”said Van Thawng Thawng, a former Chin student who is the general secretary of the same union. “One of my classmates was arrested and another was killed trying to save his sister in a protest, and my mother, uncle and grandmother have all died in the past few months.”

While Van Thawng Thawng’s mother died from a long battle with cancer, he believes that both his uncle and grandmother had COVID-19 because of their symptoms, but with limited testing, he doesn’t know for sure.

“Everyone dies and everyone feels depressed. It’s hard to comfort people and make them feel better. “

Across Myanmar, young people report anger, sadness and helplessness after the military seizure of power on February 1 and brutal crackdown on anti-coup protests. They say those feelings have only increased since July when COVID-19 cases exploded in the country.

Today many struggle with the grief of losing loved ones to illness and violence.

But forced to grapple with more immediate threats such as basic safety and access to medication, attention for mental health has taken a back seat. However, experts say that with the increase in depression and suicide rates, the psychological distress can no longer be ignored.

Mental health has long been a taboo subject in Myanmar, with depression and anxiety as signs of weakness that should be treated privately. However, with mental illness on the rise, counselors are concerned about the consequences if mental health continues to be pushed aside. 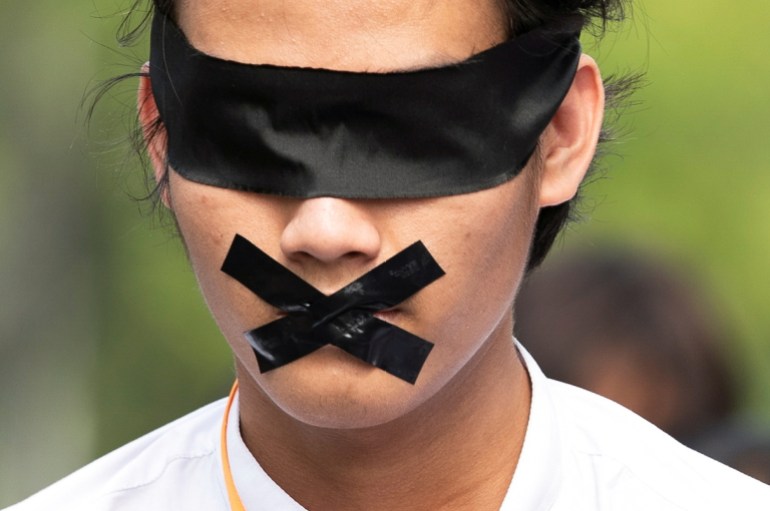 A protester protests against the military coup in Yangon, Myanmar, February 19, 2021 [File: Stringer/Reuters]

Cherry Soe Myint is a freelance consultant in Myanmar’s largest city, Yangon, and works in partnership with the Applied Mental Health Research Group at Johns Hopkins University. After recently losing her father and aunt, she experienced firsthand the psychological effects the coup and now COVID-19 had in Myanmar.

Given the severity of the crisis, it is offering free counseling services to those who cannot afford professional help.

“When I talk to my clients, I notice their suicide rates because they are hopeless and helpless. They think they have no future, that they cannot get through this really worrying situation, so they are thinking about killing themselves, ”said Cherry Soe Myint.

“A young woman, her aunt and grandmother died in late July and she thought they died because she hadn’t done enough to save them. She hanged herself. And these types of events are increasing – the risk of suicide increases. “

She found that since the coup, seven out of ten patients she has treated have expressed suicidal intent, while prior to the coup there were only two or three cases every three months.

Just last week, in an online incident, five young people, four men and one woman jumped out of a building in Yangon to escape a security force raid. It was later confirmed that two of the five had died.

For many people in Myanmar, the deep fear of the military is rooted in experiences they had or heard under the previous military regime that controlled the country for nearly 60 years until 2010. Even for today’s Generation Z, who live in a more democratic Myanmar, the fear of another decade-long fight against the same armed forces is great and has triggered an onslaught of psychological problems.

“Our grandparents and parents fought against this and spent years in prison or died. If that’s not over, will it be the same for us with decades of military rule? ”Asked Phyu Pannu Khin, a member of the Burmese diaspora in the United States and a graduate student in clinical psychology who has been providing psychological services to people in Myanmar online since the coup.

“There is intergenerational trauma and a loss of future and hope. For our [younger] Generation we have experienced relative freedom under civil government – we have tasted freedom and we had dreams, so it is particularly devastating now that all of this has been taken away. “

COVID-19 and lack of resources

The return to military rule is not the only cause of depression and anxiety in the country.

While Myanmar managed to keep COVID-19 at bay in the first year of the pandemic, cases rose rapidly in July when a third wave hit. To date, 14,499 COVID-19-related deaths have been recorded, but the actual number is believed to be much higher.

With lack of resources, closed hospitals, and the military’s hoarding of medicines and oxygen, a feeling of helplessness has increased survivors’ guilt as the population struggles to rescue injured or sick loved ones.

“With COVID-19, people are asking for oxygen and medical treatment but are not receiving these essentials. We see our family members die in front of our eyes, and most people blame themselves and feel guilty, ”said Cherry Soe Myint.

“Although I am a mental health specialist and know how to deal with it, I also feel the survivors’ guilt, but I am trying to change my thinking. Why do i have to live Why did my father die? It wasn’t me, but the situation in the country. “ 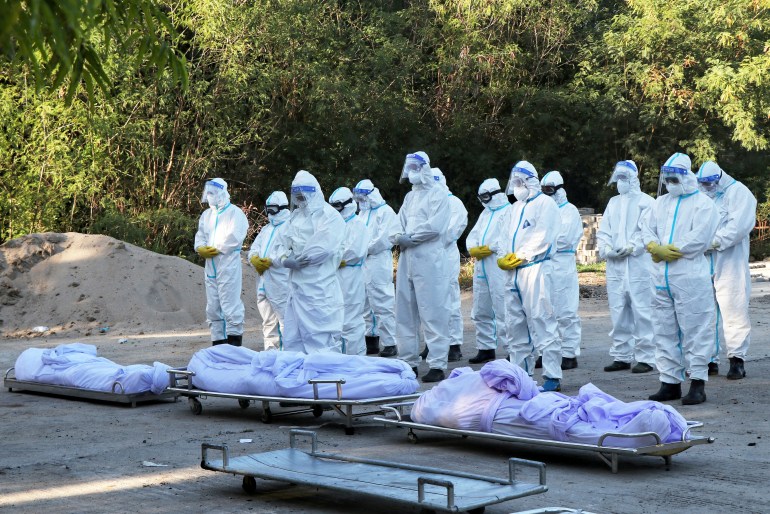 Volunteers pray in front of the bodies of people who have died of COVID-19 during their funeral at a cemetery in Mandalay, Myanmar, July 14, 2021 [File: Stringer/Reuters] 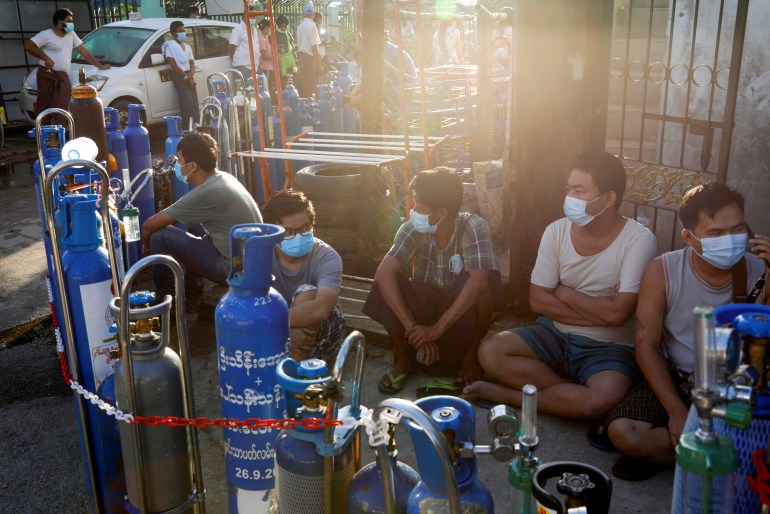 Locals line up with their tanks to refill oxygen during the ongoing COVID-19 outbreak in Yangon, Myanmar, July 14, 2021 [File: Stringer/Reuter]

Cherry Soe Myint, along with other mental health professionals, has tried to teach this type of thinking to their patients through virtual therapy sessions, but she said that given security risks, unreliable internet, and COVID-19 constraints.

While grief over the violence and COVID-19 is felt by everyone, experiences are different between different groups.

The fear of being stopped by a soldier and taken to a detention center triggers particular waves of fear among young women due to extensive reports of sexual violence, particularly against women from ethnic and religious minorities.

“I’m afraid of what soldiers might do to me. I think about it when I interact with soldiers all the time, especially at checkpoints, ”said Thet, a young ethnic activist in Yangon, holding back tears as she spoke. Fearing retaliation, she asked to use only her first name.

“During the day, when I’m busy, I don’t feel it that much, but it’s the quiet moments, especially at night, when it can be very difficult for me. I have very bad insomnia now. I can only sleep three hours straight before I wake up. “

It’s not alone. With regular evening raids and internet blackouts, the night has become an especially scary time of day for most people across Myanmar, with many experiencing similar anxiety and insomnia.

As a collective understanding has emerged from this shared grief and trauma, some have found greater openness to discussions about mental health and more support for those who seek help. Over the past six months, resources shared on social media, as well as webinar training and therapy sessions, have expanded to provide help to those in need.

For the vast majority, however, especially those like Van Thawng Thawng in rural and ethnic areas, the prevailing traditional views on mental health continue to prevent those struggling with mental illness from receiving help.

“If there were mental health resources in Chin state, that would be very nice, but across the country, Myanmar people are still not used to opening up and going to a therapist like they are in western countries,” said Van Thawng Thawng.

“Things are getting better as more and more people offer to relieve depression. But people are still not aware of it, not used to it. It will take time. “

Six health habits to comply with in your 30s

Coronavirus spreading like by no means earlier than in Americas, well being company…

COVID Fatigue: Are You Among the many ‘Vaxxed & Finished’? –…